Dandelion is known mostly as a seasonal plant, of which all its parts have been used in cooking and traditional medicine from ancient times. To many who are unfamiliar with the plant, the greens are many times considered an invasive weed in fields and gardens, but they are in fact edible and highly nutritious. As I’m not a gardener myself, nor a forager of wild greens, I’ve never tried them, until I recently found them at the store, and decided to buy a bunch.
My unhappy encounter with another highly nutritious green, the trendy kale, made me a bit skeptical as for the taste of these new greens, and I didn’t have my hopes too high about their flavor nor texture. However, in this case, I was pleasantly surprised by how much I liked the greens, both when raw and cooked. The leaves have a fresh, slightly bitter taste, and they worked beautifully with different dishes, as you can see here.
All the dishes are quick and easy to assemble, and are a great tasty way to add greens to your diet. Try any and enjoy.

Notes:
* The greens can be quite sandy, so it’s important to wash them thoroughly. Check HERE for the easiest method of washing greens.

To cook dandelion greens:
Steaming the greens, rather than boiling and pouring off the water, keeps the nutrients in.

Chop a bunch of washed dandelion greens. Place in a large flat pot and add ½ cup water. Cover the pot and cook for about 4-5 minutes, on medium-high heat, until the greens soften. Uncover the pot and cook, mixing occasionally, until the water evaporates. The cooked greens can be kept in the fridge, in an airtight container, for 2-3 days. 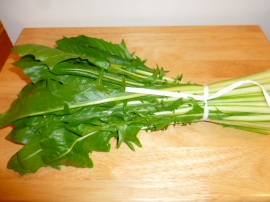 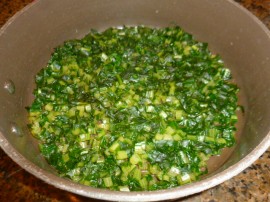 Dandelion Greens Salad
The slight bitterness of the greens works well with the sweet-sour vinaigrette, the apple and the cheese and walnut. 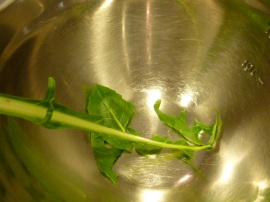 Toasted Bread with Tomatoes and Dandelion Greens
This is a take on a Spanish breakfast dish, which consists of toasted bread topped with grated tomatoes and Jamon, the Spanish equivalent of prosciutto. 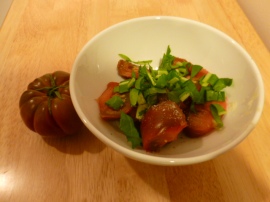 Eggs cooked with Tomatoes and Dandelion Greens
A great dish for breakfast or brunch.

In a medium pan over medium-high heat, sauté chopped garlic in a bit of olive oil. Add chopped heirloom tomato and season with salt and freshly ground pepper. Mix and cook for a couple of minutes, until the tomatoes are soft. Add a handful of chopped washed dandelion greens, cover the pan and cook until they wilt. Crack an egg over, cover the pan again and cook until it’s done according to your liking. Serve as is, or with crumbled Feta cheese on top. 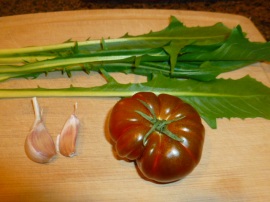 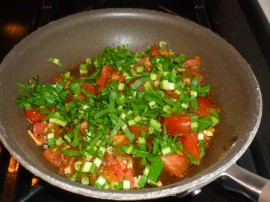 Dandelion Greens Burger
For best results, I highly recommend grinding or choping the meat at home.

For 2 burgers: mix 1 chopped steak (about 9 oz/255 grams) with ½ cup cooked dandelion greens (see above). Season with salt and freshly ground pepper and mix well. Create 2 flat patties from the mix. Fry on both sides in a lightly oiled pan, over medium-high heat. Lightly toast English muffins (I used whole wheat), or hamburger buns, and spread with mayonnaise and mustard. Add fresh dandelion greens, the fried patties and sliced tomatoes, and serve immediately. 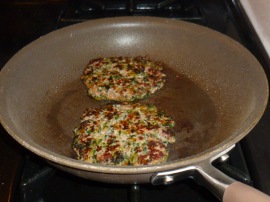 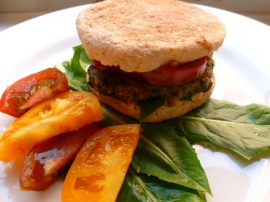 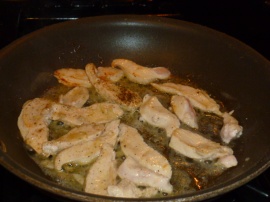 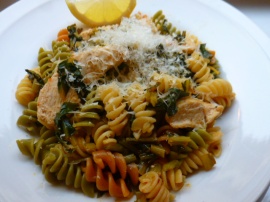 43 thoughts on “A Few Dishes with Dandelion Greens”